Fill up your room with things from your past. 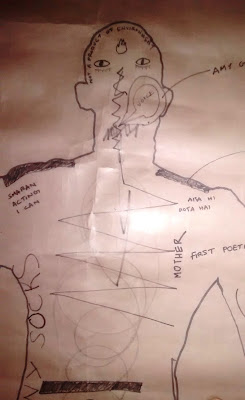 Everyone who has ever come to my flat where I have been living for almost two years after moving out my parents’ home has said the same thing.
‘You should do up the place. Get a few paintings or a lamp maybe? Your walls look empty.’
I wasn’t.
Everything I am, everything I needed, I carried inside me. I never let my walls become barriers holding up reminders from my past. Empty walls let me be whoever I wanted to be. I didn’t let lamps impose warmth; instead I let white light expose everything I was going through without the filter of soothing yellow. I faced everything head on.
And it made me weak. I only realized that last night when I found a chart I created long ago that lists important events in my life. I was packing and I found it rolled up, forgotten in a corner. I opened it and my life lay before me. Everything I was, all things that have brought me where I am, it was there.
The answer to what I am and wanted to become lay there chalked out in who I have been. Immediately it started to fill me up taking over the emptiness I have been battling in recent months. I took me back to tougher situations I had handled and won over. It brought me back my old joys and victories, old love affairs, discoveries… I felt full.
I can’t believe I have lived two years in a place without letting it comfort me.
I have decided to move back to my parents’ for a couple of months to regain what I have lost to unfamiliarity. But the next house I move into… I am going to bring so many things from my past and let them surround me. You should too!

I am trying to make sense of it. I am trying to vomit.
I am trying to bring myself to cry. Just somehow, release it. This inexplicable itch that runs from somewhere in the chest all the way up to my brain. Which way does it flow, where did it originate, I do not know.
The itch is all consuming. It doesn’t let me find any stillness. I have not been writing as much as I would like. The itch is my excuse for everything I am not doing.


I want to be loved I think. I want to love I think.
Its a funny world we live in... People hold it against you if you fall in love with them. The itch will drive everyone away.
Posted by Shivam S at 3:42 AM No comments:

I lie on bed blue. I arch my back and slowly my body lifts itself from the center, feet and neck pressing into the foam supporting all my weight. My pelvis is determined.
I am kicked twice but my pelvis is determined so piteous arms pick me up instead. My neck is heavy and falls twisting to reveal the nape. Spit drops softly and rushes to my ears. I look up, lips parted, parched, and I am once again shown mercy.
I am pulled higher. It should scare me.


But I am held from between my legs two fingers clenching into me so I feel safe. I have a taste of the stars. And when I am done my pelvis curls sinking the body along to its beginnings. Everything returns to normal.
Posted by Shivam S at 11:29 PM 2 comments:

Shivam S is a writer, performer, theatremaker, copywriter based out of Mumbai. This discourse was a part of his session on 'Queer art and performance' at The Goa Project (27.02.2015) 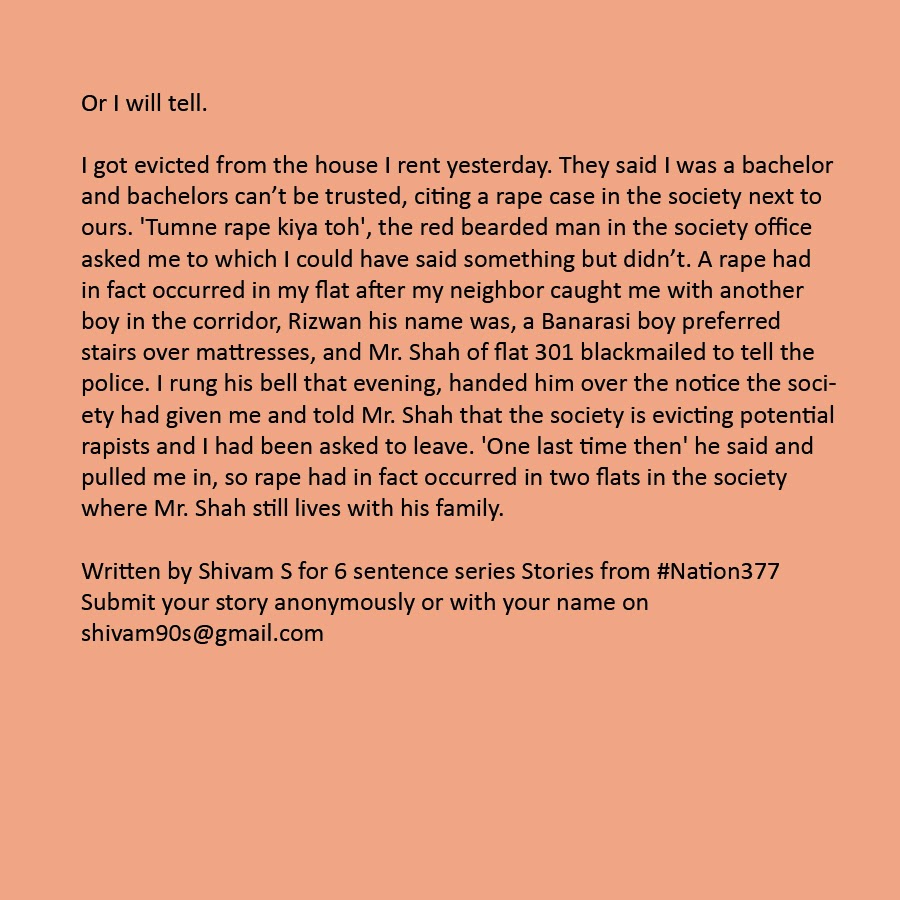 This is fiction. Check out the facebook page: https://www.facebook.com/somethingssimple for  updates on LBGQ arts and writing in India.
Posted by Shivam S at 1:44 AM No comments:

Your city where you have lived most, more often than not, is a terrible place to exercise your sexuality, absolutely horrible for maneuvering it in new directions, and a nightmare god forbid if you’re on a path of exploration.
Every space in it is etched with some remnants of who you have been and any unprecedented desire will make you feel treacherous towards yourself killing the will to explore it.
And if spaces weren't enough… there is your social circle and square and grid which commodifies your sexual honor pulling its value up and down as per every little move you make. Parents, relatives, friends, colleagues, institutions, every random person you cross is constantly scrutinizing and negotiating the price of your sexual being.
Negotiating with whom?
Negotiating it with you. Such is its manipulation.
Religion, industries, politics all thrive off stifled sexuality (Sexual freedom is the aspiration underlining every sales pitch, sexual control in case of religion) and they come together and bombard you with propaganda so immense, you think you can escape it but you realize later (and most people never do) that you have just been living on concessions.
Internet offers the much needed respite from this constant vigilance and trade. For how long is a separate story altogether. But over two decades of sexual expression stands on the anonymity provided by the medium which has allowed people to escape and practice their desires.
But the thing about virtual sexual expression is (and this is not a fact but my own observation as an online user of sexual platforms) that rather than working for your existing personality and accessing that, such expression ends up creating a separate persona of you (Based on excess and manufactured aspirations) which it functions with and for … causing dissocia between the person you are on and offline... leaving the offline self of the user unfulfilled just the same.
Travel is another escape which a lot of people resort to, those who can; they go to places where nobody knows them and try to live they sexual life they want. But then again, most just leave all they have discovered behind when they go back and return to the familial tyranny of home.
Lack of discourse on sexuality is one of the main reasons why we are so unequipped to handle our sexual nature. We are quick to declare any unfamiliar behavior or act as perverse and organizations only chance upon the insecurities of the people and stigmatize it as a measure of control, appropriation, regulation, maintaining order and demand etc.
I think it shouldn't be so difficult… for me and everyone else around. I don’t want to be manipulated at every level of my social intercourse. I want an environment where my sexuality flourishes and not for sex' sake, also for sex sake, but for the sake my overall growth and well being. It has to start with me fighting myself and my prejudices and self image but it’s also about the people around me who need to think a little more about what they expect from their sexuality and others’ before putting a tab or tag on it, which is what the controllers want us to do.
Sex is the biggest product in the market and the more uncertainty there is over it… the more curiosity there will be among its consumers, the more ways there are to sell it, and over sell it, in any way the sellers may please. I don’t want to buy something that I must produce for myself. What do you think?
Posted by Shivam S at 4:39 PM 2 comments: 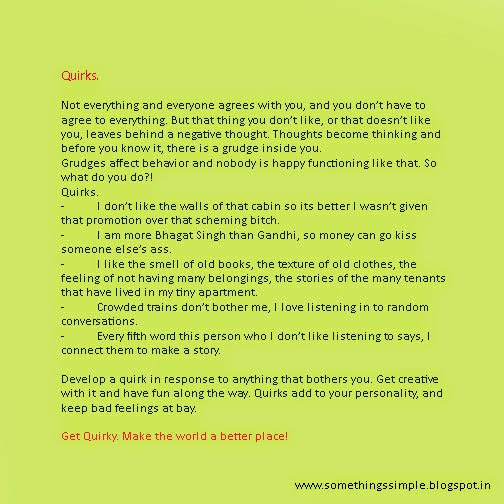